School Corp. takes action after student walks away from school 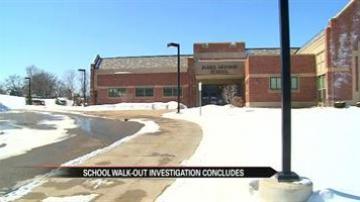 SOUTH BEND, Ind. -- The South Bend School Corporation has taken action related to the student who walked away from Monroe Primary Center on February 18, but they will not detail what action was taken.

The first grader walked out of the school and was found blocks away from school out in the cold.

Former South Bend School Corporation teacher Carolyn Olson spent a lot of time with first graders through the years. When she heard about the first grader who walked away from Monroe Primary Center, she says she was curious to see who was blamed.

"It's a pattern that keeps happening that teachers are always at fault- and it's got to stop," said Olson.

The school district's investigation of the incident just wrapped up.

"It has always been our expectation that in dealing with our elementary students, the faculty and staff are to be constantly supervising their whereabouts and safety. That failed to occur in this incident. As a result, today we initiated personnel action. We are not in a position to discuss that action at this point."

The district won't comment or elaborate on which employees are on the hot seat or what the repercussions will be.

According to their investigation, the little girl asked to leave the cafeteria to see the school nurse.

After visiting the nurse and being told to go back to class, the student spent several moments loitering the hallway and attempting to hide from staff.

"They only have so much control over the children. And a 6 year old or 7 year old should know what the rules of the school are, but for the teachers to be blamed is way out of line," said Olson.

Board member Bill Sniadecki said he does not support the district possibly suspending select school employees.

Instead he would like heightened security and alarms on all the school's doors.

"Alarm on the door? You can't lock them on the inside for sure. But here again we're covering up responsibility. I still say that responsibility goes to the child. And they don't want to do that. They just seem to want to blame everybody else no matter what," said Olson.

The little girl wandered for several blocks and ended up being picked up by a TRANSPO bus driver named Cheryl.

Cheryl took the little girl to the main station and then called police.

Sources say the mother pulled her daughter from the district.

Board members say she's looking for an apology.

This is the full text of Engel's statement:

On Tuesday, February 18, a first grade student walked out of Monroe Primary Center unsupervised and was eventually picked up by a Transpo bus driver, who notified the police. Fortunately, the child was not harmed in any way. This is an incident that the School Corporation has taken very seriously. Accordingly, the Superintendent asked the School’s Safety and Security Director to conduct an investigation.

- The student was away from the rest of her class because she had asked to see the nurse.

- After having visited the nurse and being instructed to return to her classroom, the student spent several minutes loitering in the hallway and apparently attempting to hide from staff.

- The student eventually left the building by way of Door #2.

- Based on discussions with the student and her mother, we understand that after leaving school, the student did not go to her family’s apartment, but went to the apartment of a friend in the same complex. When no one was home, the student attempted to walk to the home of a relative and became lost.

The student’s actions do not mitigate the fact she was able to leave the building unnoticed.

It has always been our expectation that in dealing with our elementary students the faculty and staff are to be constantly supervising their whereabouts and safety. That failed to occur in this incident. As a result, today we initiated personnel action. We are not in a position to discuss that action at this point. We will disclose additional details if and when that action becomes final.

There are approximately 19,000 students in our care. Tens of thousands of interactions occur every day in which our staff keeps students on task and safe. But even one mistake is serious. This is why we have been deliberate in examining this incident and why it will continue to be given the utmost focus.