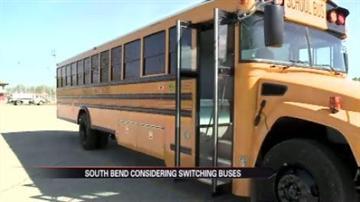 SOUTH BEND, Ind. -- The South Bend School District is considering switching to buses that run on propane in order to save money. The district says it could save hundreds of thousands of dollars.

Initial estimates indicate a single bus would save the district $38,000 over the 12 year life of the bus.

"With the transportation budgets across the state being what they are, it's wise for us and prudent for us to look at where we can reduce costs,” said Schmidt.

In addition to saving the district money on fuel, it protects the environment, according to MacAllister’s transportation business manager John Barrington.

"Clearly the propane is much more environmentally safe,” said Schmidt.

Many parents may be wondering if the propane they used to grill their steaks is safe fuel for buses.

Propane is not the only alternative fuel source the district is considering. Compressed natural gas is another low cost alternative.

"We do have options and that's why we want to explore them deeply and quickly,” said Schmidt.

A 30 day study has just been started to assess the viability and benefits making the change would have.

The school district has to get that study done quickly because it is in the middle of the bidding process for purchasing new busses for next year.

Once it buys a diesel bus the district is stuck with it for 12 years.