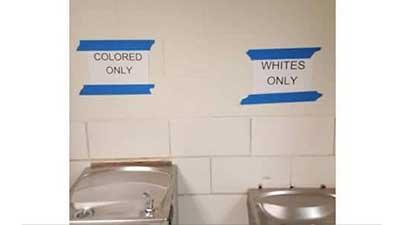 The South Bend Community School Corporation released a statement about an incident that happened on Thursday at Riley High School. Two signs were placed over drinking fountains which said "whites only" and "colored only."

When school officials became aware of the signs, they removed them and investigated who placed the signs, according to a release from the district.

The students involved have been identified as three students who attend Adams, Clay and Riley high schools but take a morning class at Riley.

All three students will face disciplinary action, according to the district.

The following statement was included in the release:

Superintendent Carole Schmidt expressed her outrage. “I was extremely disappointed to learn of the actions of these students today. There is no place for these kinds of actions in our schools or in our community. My hope is that there can be some learning for those students involved. There will be discussions with the students at Riley about the seriousness of these signs and how detrimental they are to the culturally responsive environment we are attempting to create in all our schools.”