School threat has police and area schools on high alert 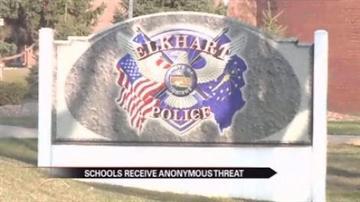 ELKHART, Ind. -- An anonymous threat has police and schools, in both Elkhart and St. Joesph Count, on high alert.

Someone has threatened to kill 20 student at five different local schools on April 15th.

Elkhart police say they learned of the threat back in January, from someone other than a school official. It is a threat that many parents did not know about and say they will not worry about just yet.

"I think they are more pranks than anything. I can’t take them to seriously because my daughter hasn’t been threatened," said Wilbert Breckridge-Peete who has a daughter that attends Elkhart Central High School.

Police say they received a threat that on April 15th someone plans to kill 20 students at five local schools somewhere in Elkhart or St. Joseph County.

It is a threat that has both area schools and police taking extra precautions.

Some parents say any threat these days needs to be taken seriously.

"If it were my child, on April 15th my child wouldn’t be here. I would have my child at home," said Donald Kincaid.

For those who feel this might be a prank or empty words, it is still affecting their child in the classroom.

"It does distract some of the kids and kids don’t need distractions right now," said Breckridge-Peete.

So far, the parents ABC 57 talked to say they have not received a letter or email from their school about this possible threat and right now police are not releasing any other details about the threat.