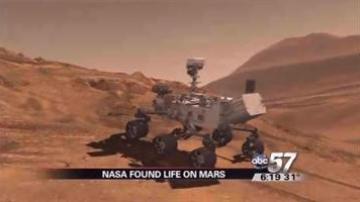 It turns out there may in fact be life on Mars.

Scientists now say they’re 99 percent sure life exist on the Red Planet based on the discovery of bacteria.

Scientists looked again at data collected more than 30 years ago by NASA's Viking Mars robot in 1976.

The second look showed geological processes on Mars is now believed to be biological activity.