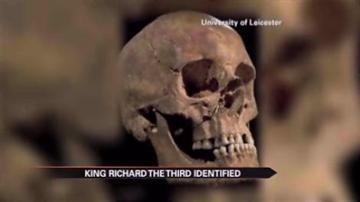 LEICESTER, England -- It is not the place you would expect to find a former king.

British scientists have confirmed a skull found in central England under a parking lot is that of Richard III.

"Take as a whole the skeletal evidence provides a convincing case for confirmation of Richard III," said Doctor Jo Appleby, University of Leicester.

Richard III was made famous to later generations in Shakespeare’s play of the same name.