Scientists use robots to spy on penguins 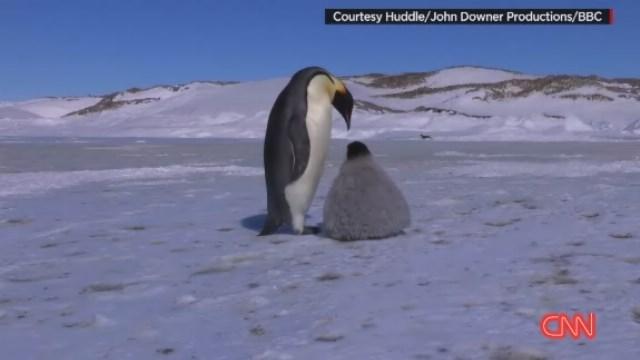 Researchers in Antarctica studying penguins have created a penguin robot to collect data.

The researchers wrote in the journal Nature Methods that penguins aren't as stressed by the robots. Their heart rates are lower than if a human researcher entered the colony to collect data.

The first fake chick rover had exposed wheels, but was still allowed in the penguin huddle.

The new and improved version was introduced by filmmakers doing a documentary miniseries called Penguins: Spy in the Huddle.

“They're Caterpillar tracks,” said Philip Dalton, producer of Penguins: Spy in the Huddle.

The Chick Cam was such a hit it had an adult taking the fake under its wing.

“They made vocalizations to communicate with the fake penguins,” said Yvon Le Maho, lead researcher in the penguin-bot study.

A real chick answered, but researchers say the next generation of fakes may play penguin calls.

The most sophisticated fake lays eggs with cameras in them.

“And the egg would scoot out, out of the bottom here,” said Dalton, showing the contraption.

It gives a low-angle view of the area.

One robotic fake capable of raising its wings was so alluring that a male started preening it.

That's when the two-timer's real mate returned. You call it research? She calls it having a roving eye for a rover. She decked it.