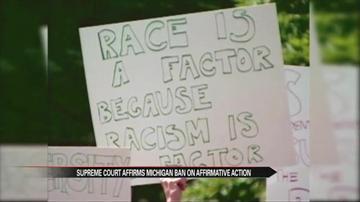 WASHINGTON, D.C. — The U.S Supreme Court upheld Michigan's voter-supported law that bans the use of racial criteria in college admissions.

Voters passed the law prohibiting publicly funded colleges from granting "preferential treatment to any individual or group on the basis of race, sex, color, ethnicity or national origin."

"It's going to open up the door, I think, to many states following suit. Some have already done so, but I expect many others will look at this same approach," said Jonathan Turley, a professor of law at George Washington University.

This ruling could create a new set of questions in the debate over affirmative action and its role in education.