Search and rescue crews search Lake Michigan for swimmer, find no one 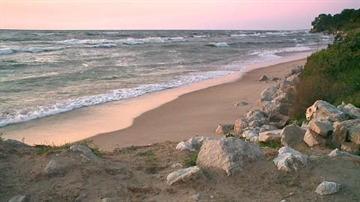 According to police, a concerned observer claims to have seen a swimmer in distress and went to call 911 for help. By the time they returned to the shore, the swimmer was nowhere to be found.

The call to 911 came in just before 7:00 p.m. Sunday. At the time, waves on Lake Michigan in the area were seven to eight feet tall, according to police.

Multiple agencies responded to the rescue operation, including the Coast Guard. Their helicopter circled overhead as a rescue boat attempted to get into the area. The waves were to great, however, and the boat was forced to turn back.

Meanwhile, firefighters went door to door at the Chalet by the Lake community asking if everyone was accounted for. They found no one was missing and by 9:00 p.m., with no other reports of missing swimmers, most of the searchers were called off.

As the waves continued to crash mightily against the rocks on shore, and the last traces of sunlight faded into twilight, the Coast Guard continued their circling.

Swimmers found on the beach nearby were questioned to determine if any of them could have been the swimmer the caller saw. There’s been no word yet, whether or not they could be placed in the water at the time of the call.

At any rate, searchers don’t look at Sunday night’s situation as a waste. They say, it’s always important to call for help if you think someone is in trouble. “The call that you think is nothing, may be somebody in trouble,” said Lt. Martin Kurtz, a member of the Berrien County Sheriff’s Office Marine Division.

Kurtz warns us all to stay out of the water when the waves are large and riptides present. According to Kurtz, playing in the surf puts yourself and rescue crews at serious risk of injury or death.