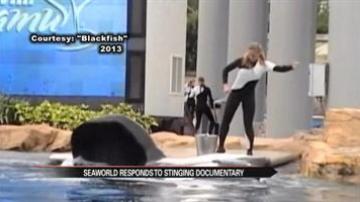 The marine park SeaWorld is lashing back at a stinging documentary and its charges of animal mistreatment.

The movie Blackfish chronicles the story of Tilikum, a Sea World Killer Whale that has been associated with three deaths during 30 years in captivity including the death of SeaWorld trainer Dawn Brancheau in 2010.

The company took out a full-page ad in eight major newspapers Friday to "set the record straight."