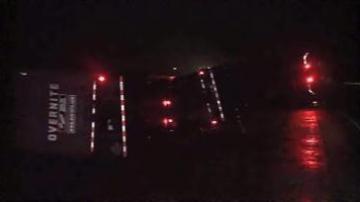 ST. JOSEPH COUNTY, Indiana -- Four people were sent to Memorial Hospital around midnight after a semi crashed, sending debris flying into the other lane.

Police said the debris then hit another semi and an SUV that had a child inside.

According to police, the semi crashed into the median where it rolled over.

The driver told ABC 57 News that he hit a bump in the road and the lost control of the vehicle.

Both semi drivers were taken to the hospital as well as two people in the SUV. Police say a 3-year-old was also in the SUV but wasn't hurt during the crash.

"It was too quick, I mean, I thought I passed it and I went to look forward to look in my mirror, and that's when it came through my windshield," said John Weaver.

Both semi drivers said they are UPS employees. One of them was traveling to Parsippany, New Jersey.