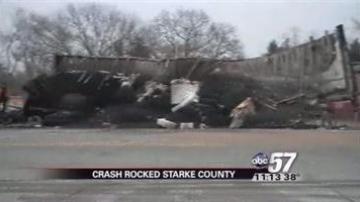 STARKE COUNTY, Ind. -- Clean up crews were out last night, after a car hit a semi-truck on the U.S. 421 and exploded.  Neighbor Raeann Hopkins lives all the way down the street from where this semi-truck exploded today, but she still heard the explosion.

The Starke County Sheriff's Department says the semi truck driver was driving northbound on U.S. 421, when a woman made a right hand turn in front of him and hit his fuel tank.

"The semi driver attempted to avoid the collision by going off the road, but the vehicle hit his fuel tank anyway and the truck burst into flames", said Deputy Adam Gray with the Starke County Sheriff's Department.

Firefighters put out the fire in about an hour, and the semi-truck driver miraculously got out of this truck unharmed.  He refused medical treatment.  The woman who was driving the SUV was taken to a nearby hospital with minor injuries.

Hopkins says these drivers were lucky.

"This corner especially, because there are so many semis that fly through here, they have no reaction time", said Hopkins.

The Sheriff's Department also said that the woman driving the SUV will most likely be charged with making a right turn over a center line.