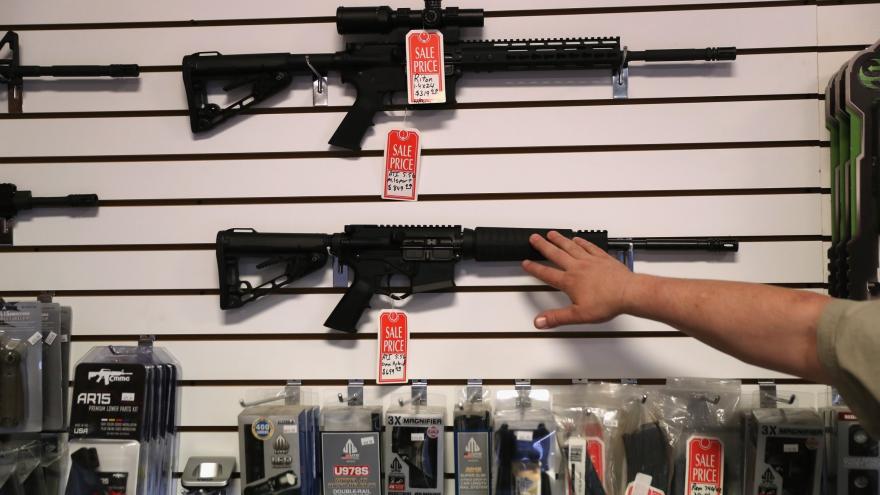 "I am willing to move forward with the Republicans on banning these bump stocks," the Connecticut Democrat said on CNN's "State of the Union."

Murphy, an outspoken supporter of gun control legislation whose state suffered a mass shooting at an elementary school in Newtown in 2012, said the country was facing an "important moment" in the wake of the Las Vegas massacre because even the National Rifle Association supports a review of bump fire stocks to see if they are in accordance with federal law.

The Bureau of Alcohol, Tobacco, Firearms and Explosives said bump stocks -- devices that enable someone to essentially convert the fire of a semi-automatic rifle into that of an automatic one -- were found in the Las Vegas gunman's hotel room.

Murphy stressed that he viewed a ban as an initial move on gun control and said Congress should mandate background checks for all gun purchases.

"That would be the clear next step," Murphy said. "That should be our North Star."

The NRA on Thursday called for the ATF to review its regulation of bump stocks, signaling support for an administrative ban. Murphy said he believed the matter was something for Congress to address, instead of relying on the ATF to regulate it.

"Ultimately, I think we have to have a bill," Murphy said.

In a separate interview on "State the Union," Wisconsin Republican Sen. Ron Johnson indicated his support for banning bump stocks through legislation or the NRA's preference, administrative action.

"However that gets fixed, I support it," Johnson said.

California Democratic Sen. Dianne Feinstein, a leading voice on gun control, said in an interview on CBS' "Face the Nation" that she viewed the NRA's position as "a step forward," but that Congress needed to address bump stocks.

"Regulations aren't going to do it," Feinstein said. "We need a law."

She said the bill she was looking to pass was narrowly tailored and despite concern from gun advocates, would not touch semi-automatic rifles.

"It does not take anyone's gun," Feinstein said.

NRA CEO Wayne LaPierre declined to support the legislation in a separate interview on CBS, saying bump stocks were a matter for the ATF.

"We think the ATF ought to do its job," he said.

LaPierre also accused Feinstein of wanting to use the bill for a broader crackdown against firearms.

NRA Executive Director Chris Cox, in an interview on "Fox News Sunday," also maintained that the NRA supported ATF regulation of devices that made semi-automatic guns effectively into automatic ones, but disavowed any legal ban.

"We don't believe that bans have ever worked on anything," Cox said.

House Majority Whip Steve Scalise, who was shot earlier this year at a congressional baseball practice, said in an interview on NBC's "Meet the Press" that people were in a "rush to judgment" and Democrats were using this as a way to begin pushing more gun control.

"They've got a bill written already," Scalise said, adding, "They want to go out and limit the rights of gun owners."

He called for more time for fact-finding before supporting legislation on bump stocks and said he supported the ATF review.