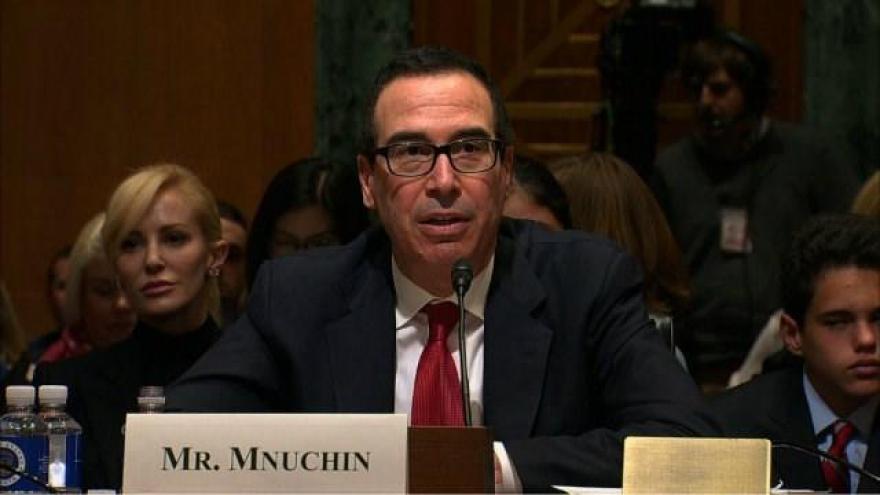 WASHINGTON (CNN) -- The Senate voted Monday to confirm former Goldman Sachs executive Steven Mnuchin as the next treasury secretary, the latest Cabinet member to be approved after a lengthy and at times contentious confirmation process.

The vote was 53-47, mostly along party lines, with Sen. Joe Manchin the lone Democrat voting yes.

The Senate then voted to confirm David Shulkin as the next secretary of the Department of Veterans Affairs. The vote was 100-0.

Democrats were unable to block Mnuchin, as they are outnumbered by a largely unified bloc of Republicans, 52-48.

"Mr. Mnuchin has 30 years of experience working in a variety of capacities in the financial sector," said Senate Finance Chairman Orrin Hatch, a Utah Republican. "He has experience managing large and complicated private-sector enterprises and in negotiating difficult compromises and making tough decisions -- and being accountable for those decisions. Mr. Mnuchin is clearly qualified to serve as secretary of the United States Treasury."

Schumer argued that Trump was breaking promises made in his populist pitch to voters by hiring Wall Street veterans, like Mnuchin, to oversee the very institutions he railed against on the trail.

"President Trump told Steve Mnuchin -- a Wall Street insider with decades of experience in that board room he described -- 'you're hired' as my treasury secretary no less," Schumer said Monday. "That's a broken promise."

The Mnuchin fight has lacked some of the last-minute theatrics that marked confirmation battles last week -- including a string of protests against Education Secretary Betsy DeVos and a surprising rebuke of Sen. Elizabeth Warren in the fight over Attorney General Jeff Sessions.

Instead, all eyes are on Labor nominee Andrew Puzder, who will come up for a confirmation hearing Thursday, almost one week after revelations that he had hired an undocumented worker to do housework for him. That revelation has led Democrats to call for his removal as nominee, but top Republicans have stood firm behind Puzder. The main focus will be on rank-and-file Republicans, and whether they change their minds on him.

Trump's pick for the Supreme Court, Judge Neil Gorsuch, continues his tour of Capitol Hill this week -- with stops with Republican Sens. Todd Young of Indiana, Joni Ernst of Iowa and John Kennedy of Louisiana.