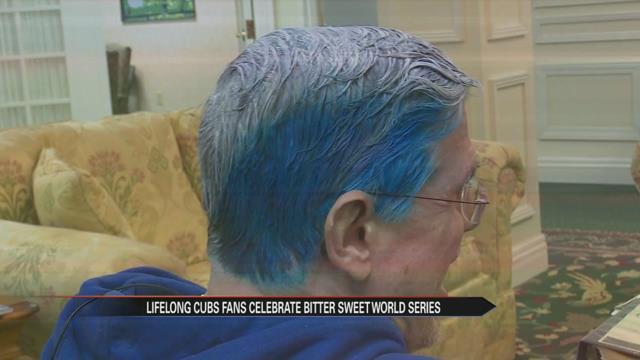 If you’re looking for the biggest Cubs fans in town, look no further than St. Paul’s retirement community in South Bend.

A group of residents are celebrating the big win, and some say they owe it to a special friend.

“I told everybody here that if the Cubs win the World Series, that I would have my hair colored red white and blue,” Haupert said.

He did so Thursday at the St. Paul’s salon.

It’s been even longer for fellow resident Russell Andrews.

He’s happy to see at least one Chicago Cubs World Series win in his lifetime, but he wants even more.

“I’m 85. You get pretty close, you know? Is there going to be another chance or not? But actually I believe there’s going to be three or four more years of this,” Andrews said.

As these mega-fans celebrate, they’re thinking of a buddy who passed away Tuesday.

Bill Madden was a St. Paul’s resident who won the chance to attend game four before ending up in the hospital.

“That was the only downer,” Haupert said.

But Haupert says he knows madden had the best seat in the house Wednesday, and maybe even helped break the curse.

Whatever the reason for the win, Haupert and Andrews aren’t wasting a moment.