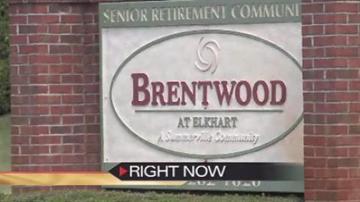 ELKHART, Ind. -- A resident of the Brentwood at Elkhart senior living facility was tied up and robbed in his own apartment. We wanted to know how an intruder could get into the facility.

"Officers from the Elkhart County Police Department were dispatched to Brentwood living facility which is 3600 East Bristol. Upon arrival they located an 85 year old man who had been robbed at some point in the night they don't have an exact time," said Lieutenant Mike Sigsbee of the Elkhart Police Department.

Emeritus, the parent company of Brentwood, released a statement about the incident:

On Wednesday, August 21, at approximately 5:11 a.m., a staff member at Brentwood at Elkhart, an independent living community, heard a cry for help from a resident’s room. When she entered the room, she round the resident lying on the floor, bound by his hands and ankles. He said he was robbed by two men wearing ski masks. He gave them $200. The police were immediately contacted and the resident was transferred to the hospital to be checked, where he remains for observation.

The doors at Brentwood at Elkhart are alarmed and no alarms sounded during the night. We are cooperating fully with the police investigation and are conducting our own investigation into what happened.

As always, the safety and security of our residents are our top priority at Brentwood at Elkhart. We would like to thank our staff and the Elkhart Police Department Office for their diligence in this matter, and we will assist them in any way possible.

"The nature of injuries I believe were non-life threatening but due to his age he was kept at the hospital," said Sigsbee.

The man has since been released but the identity of his attackers remains under investigation.

Police say there were no signs of forced entry.

We ask police if there's any indication that the suspects could have been staff- they say there is no indication of that at this time.

Police say they are not limiting their search to just two men. They say there may have been more involved.