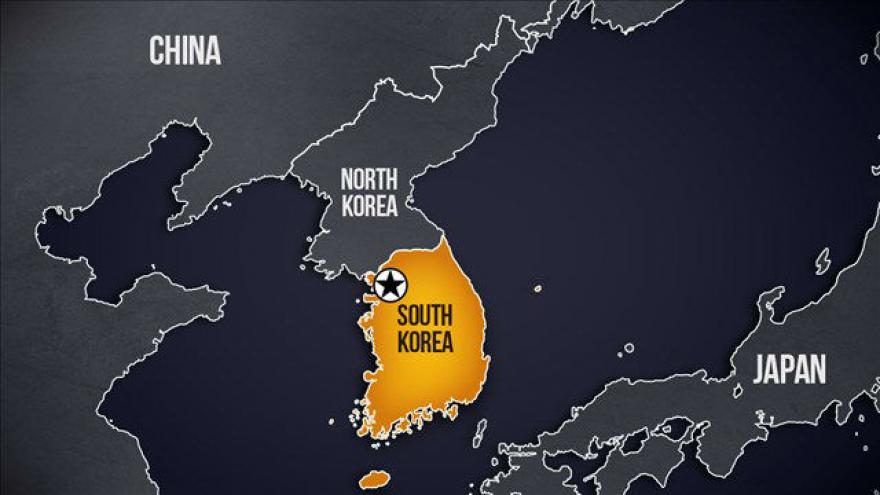 South Korea sent a message to the North with a series of live-fire drills Monday that it said were a \"show of its willingness\" to wipe out Kim Jong Un\'s regime.

(CNN) -- South Korea sent a message to the North with a series of live-fire drills Monday that it said were a "show of its willingness" to wipe out Kim Jong Un's regime.

The drills came one day after North Korea set off tremors on the Korean Peninsula by testing a massive hydrogen bomb, prompting international condemnation and calls for tougher sanctions.

Seoul and Washington will look to deploy more US strategic military assets, such as aircraft carriers and bombers, to the region, Maj. Gen. Jang Kyung-soo said at a news conference Monday.

Jang also said South Korea plans to carry out another strike drill to show its "strong will and ability to respond."

-- China said it hadn't detected any extra radiation from the test along its border.

-- US Defense Secretary James Mattis said House that any threat to the United States, its allies or its territories "will be met with a massive military response, a response both effective and overwhelming." He said "we are not looking to the total annihilation of a country, namely North Korea, but as I said, we have many options to do so."

-- Trump took to Twitter after the announcement and said North Korea had become a "great threat and embarrassment to China." He also warned South Korea their "talk of appeasement with North Korea will not work."

-- Pyongyang on Sunday claimed it has the ability to place a miniaturized nuclear weapon atop a missile with intercontinental capability, making it a direct threat to the United States.

The South Korean joint military drill was carried out by the Army and Air Force.

It involved multiple F-15K fighter jets and surface-to-surface ballistic missiles hitting targets off the country's east coast to simulate a strike on North Korea's nuclear test site, according to a statement from the South Korean Joint Chiefs of Staff.

"The joint exercise between the Army and the Air Force was a show of its willingness not only to wipe out the origin of the enemy attack but also the leadership and its supporting groups," said Moon Sang-gyun, a spokesman for South Korea's Defense Ministry.

The drill was announced after Trump's warning on Twitter to South Korea that "talk of appeasement" won't work. The phrase invites a comparison to negotiations with Hitler prior to World War II, and was likely not well received by the South Korean government.

President Moon Jae-in's office responded by reiterating the government would "pursue the denuclearization of the Korean Peninsula through peace with our allies." Moon was elected in May and has long campaigned for more cooperation with Pyongyang.

Adam Schiff, the top Democrat on the House of Representatives Intelligence Committee, said he didn't see the point of calling out South Korea at this time.

"I'm sure that Pyongyang enjoys seeing us fight with our own ally in the region," Schiff said. "We need to be working hand in hand with South Korea and with Japan... why we would want to show divisions with South Korea makes no sense at all."

Neither Washington nor Seoul has said if Moon and Trump have spoken over the phone, though US and South Korean military advisers have been in touch.

US threat on trade partners

In his series of tweets, Trump also called out China, saying that Pyongyang's actions are a "great threat and embarrassment to China, which is trying to help but with little success."

Beijing is currently hosting an international economic summit, and experts say the nuclear test could have been timed to coincide with that.

North Korea has timed missile tests this year to coincide with other important Chinese events, pointing to the missile test during the May "One Belt One Road Summit."

Trump also tweeted that the US was considering cutting off all trade with "any country doing business with North Korea." That would include China, which is long viewed as North Korea's only real regional ally and economic lifeline.

Critics worry Trump's threat could be perceived as an empty one -- China is the largest US trading partner in terms of goods, and a trade war could be devastating.

Concerned parties will be watching closely what happens at the United Nations emergency meeting Monday.

It's the second meeting of its kind in just days -- ambassadors met last week to respond to North Korea's launch of a missile that flew over the northern Japanese island of Hokkaido.

The UN issued a strongly-word statement but stopped short of announcing additional restrictions on top of tougher sanctions passed in early August.

The August sanctions are some of the most stringent to date, and the Trump administration has started punishing companies for doing business with North Korea -- so-called "secondary sanctions."

Sanctions have long been a tactic the international community has employed to punish and isolate Pyongyang, but in many ways they have failed.

The Kim regime developed its weapons and nuclear program despite the international measures designed to cripple the economy and which exacerbated periods of mass starvation.

North Korea claimed the device tested Sunday was a hydrogen bomb, a much more powerful type of nuclear weapon that uses fusion instead of fission to increase the blast yield, or destructive power. It is also known as a thermonuclear bomb.

While it's nearly impossible to verify the North Korean claim that the weapon was small enough to be put on a missile, the tremors that followed the blast can help scientists calculate how powerful the explosion was.

NORSAR, a Norway-based group that monitors nuclear tests, estimated it had an explosive yield of 120 kilotons, which means the power of 120,000 tons of TNT. South Korean officials gave a more modest estimate of 50 kilotons.

The country has for years worked on miniaturizing a nuclear warhead so it can be fitted atop a long-range missile and survive the heat-intensive process of re-entering the earth's atmosphere.

"The fact is the North Koreans have now done sixth nuclear tests ... it's not surprising that they've gotten here," said Jeffrey Lewis, the director of the East Asia Nonproliferation Program at the Middlebury Institute of International Studies.