Serious accident stalls traffic on US31 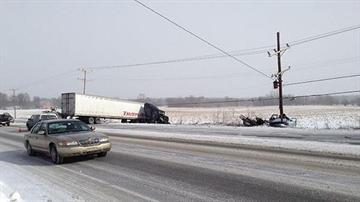 ST. JOSEPH COUNTY, Ind. -- Traffic was stalled on US31 for several hours after a car, SUV and semi collided near the South Side Church of God. The car took out a power pole and power line.

Police believe weather was a factor.

"With the snowfall and blowing and drifting snow, especially in rural areas, that causes issues," said Sergeant William Redman of the St. Joseph County Police.

It took crews several hours to clear the road.

Utility workers had to be called out to fix the broken power line and power pole at the scene.

"I think if everybody slowed down and allowed themselves enough time, we could avoid some of these crashes that we're seeing<" said Redman.

In addition to slowing down, police say you shouldn't follow too closely.

Police say a lot of motorists are relying too heavily on anti-lock brakes and four-wheel drive.

Heavy wind and drifting snow will continue to be a problem into the evening. Police are encouraging drivers to avoid stretches of U.S. 31 and roads south of Kern Road.

There were no major injuries in the accident.