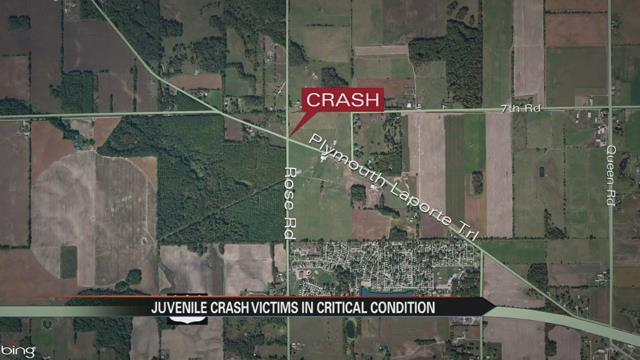 Police responded to a serious multiple injury accident that sent 3 people to the hospital in critical condition Sunday.

The accident happened early Sunday morning just before 2:00 a.m. at the intersection of Rose Road and Plymouth LaPorte Trail in Plymouth.

According to evidence at the scene, both vehicles were heading north on Rose Road near that intersection.

The name of the driver in the Durango is being withheld for investigation purposes.

Police believe Graham attempted to brake and stop for the stop sign and was rear ended by the other vehicle.

Police say witnesses told them the occupants of the Durango fled the scene.

The collision caused significant damage to both vehicles and injuries to the occupants.

Police say Graham was taken to Memorial Hospital and is listed in critical condition due to a head injury from the collision.

Three unnamed juveniles were also in the Honda Civic, two of which were seated in the back of the vehicle. Those two individuals sustained serious injuries and were transported to Memorial Hospital and are listed in critical condition, according to police.

Police have not released any other details regarding this accident. Stay with ABC 57 as we work to gather the latest.