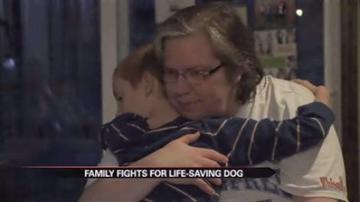 GOSHEN, Ind. -- A Goshen Family is trying to raise thousands of dollars for a service dog for their son who suffers from permanent brain damage.

Tannen and Kendra Kidder adopted Tyler when he was just three and half years old.  Today, nine year old Tyler is all boy.  He loves video games and playing with Hot Wheels.  But there is one thing that sets Tyler apart, he was born with Fetal Alcohol Spectrum Disorder.

He has difficulty controlling his angry outbursts, exhibits disruptive behavior, is impulsive and has a hard time concentrating.

Doctors say that there's no medication that can help him.  He suffers from permanent brain damage.

Tyler's adoptive parents say that the journey thus far has been very difficult.  Tannen explained that sometimes he feels helpless.

"You just want to do something that will hopefully solve it and sometimes you just can't."

A company based in Ohio called 4 Paws for Ability trains service dogs specifically for children who suffer from mental disorders.

Tyler's parents say it is crucial that he is paired with his dog before he hits puberty.

"Well, they say a dog is a man's best friend and this would be Tyler's friend.  The dog would be able to help him have a sense of independence," said Kendra.

But that independence comes with a steep price.  The Kidder Family has to raise $13,000 to get the service dog, and they hope to have it by early 2014.

The Kidders are planning to start some major fundraisers.  And they say that they appreciate all of the help that they've receive so far.

If you would like to help Tyler get his service dog you can donate here.