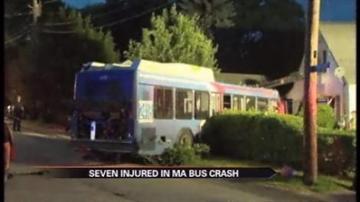 AUBURN, Mass. -- Police believe a medical issue may be to blame for a Massachusetts bus that crashed into a house.

The Wooster Worcester City Bus crashed into a home around five Monday afternoon.

The driver is in serious condition and two passengers were also hurt. The four people inside have just minor scrapes and bruises but witnesses say it could have been much worse.

The owner of the home said the bus went right through the wall and into the kitchen area.  They said a matter of three feet was between the bus and where her kids were playing inside.

The home was knocked off its foundation by at least seven feet.

Officials say it will have to be torn down.