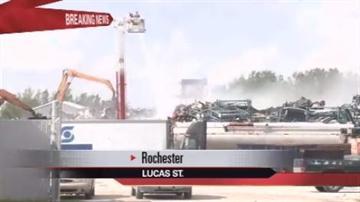 Nearly 20 homes were evacuated because of the fire. Neighbors say they knew something was wrong because it suddenly became hard to breathe. One woman even went to the hospital.

For three hours fire crews from across the county battled the fire at Rochester Iron and Metal Inc.

"They had heavy black smoke indicating some petroleum products probably burning," said Rochester Fire Chief Tom Butler. "There were cars, plastics and metals they are trying to salvage."

In all, seven different departments were called in. The main concern was the wind, which helped fuel the fire.

"It was just blowing through," said Butler. "I'm not sure if it started at the bottom or in the middle of the pile, but as the wind blew heating it up and of course with all the metal its going to transfer radiant heat."

Fire officials on the scene also called in emergency management agents from both Fulton and Kosciusko County to monitor the air quality around the scrap yard.

"The air quality wasn't at a danger level, but there was definitely a difference and they weren't sure what was causing the oxygen deficit," said Butler.

That immediately caused great concern that nearby residents would have trouble breathing, so crews evacuated the area.

All of the evacuated residents were allowed back in their homes once the fire was under control and the woman who was taken to the hospital was treated and released.

Investigators still don't know exactly what sparked the fire. However, fire officials did say it started near the drop-off area.