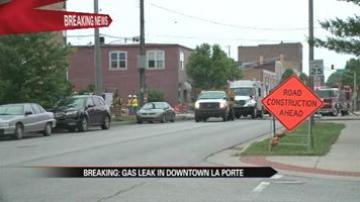 People within a 12 block radius were evacuated from the area and taken to Lincoln Elementary School.

Crews capped the leak around 7 p.m.

Officials say construction crews were working on a parking lot behind City Hall when they hit a steel gas line.

One valve was easily shut down, but the other required digging and welding.

NIPSCO representatives say dangerous levels of gas are a level four, but levels in downtown on Tuesday didn't reach .5

Residents may still experience foul smells, but should not be concerned.