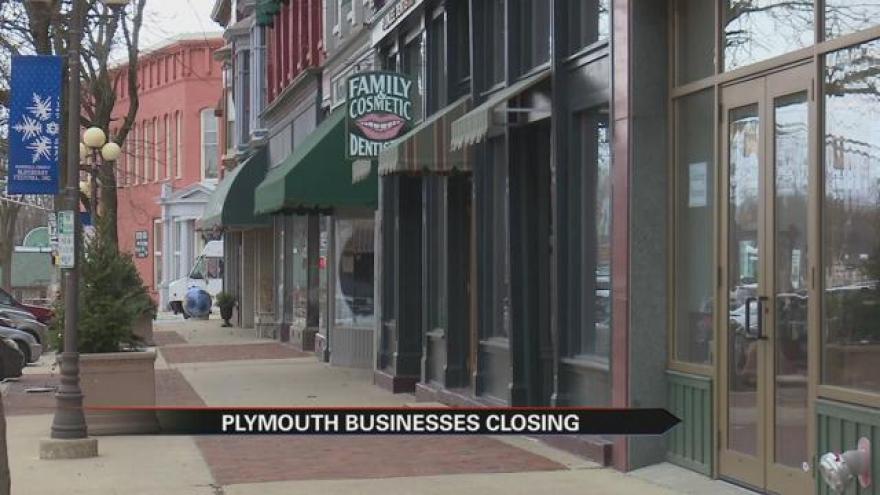 With five Plymouth businesses closing in just two weeks, the people of Plymouth are concerned. Concerned about their city, their jobs, and their livelihoods.

Conversations on Facebook show people are saying the city is turning into a ghost town.

But business owners and the Mayor disagree, saying they wouldn't classify it as that.  But they do say, things need to change.

"Parents barely have the car in gear, and kids are jumping out, and they're running out the door because they're at Mooney's," says owner, Jon Webster.

His ice cream parlor is one of the two places people can get ice cream in Plymouth.

Webster says it's the atmosphere he creates that keeps his store afloat.

But there's just one problem with that: there's not enough people coming to Plymouth.

"If you have businesses, but you don't have people, the businesses can't say," Webster adds.

In the past two weeks, five businesses have announced they're closing, and a sixth is set to close this summer.

It's a trend that's troublesome.

"It's just a trend that no municipality, no city, no mayor, wants to see," says Plymouth Mayor Mark Senter.

He says some of the closures are national chains, but he hopes it won't hurt the community long term.

"It's an anomaly I believe," he adds. "And things will come back."

Already, some plans are in place to help fix a major problem: bringing people to Plymouth.

In the works, a soccer complex, new businesses, and possibly even a hotel.

But some, like Webster, believe the city's priorities need to change. He doesn't feel that local small businesses are being given a fair shot: no tax breaks, incentives, or assistance.

"They need to consider everybody and those that are here first." says Webster. "A small business is the lifeblood to every city. That's what started it and that's what's helped built it. If you forget those people, the town will slowly die."

Mayor Senter has faith in what the future holds for Plymouth.

And to those that doubt the town?

"Get involved with your community rather than complaining about it. It's that simple," says Senter.