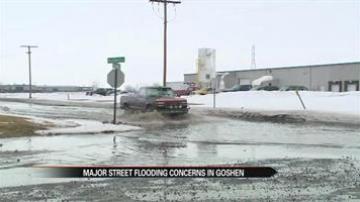 GOSHEN, Ind. -- Several areas on the south side of Goshen were flooded Thursday because of the melting snow and rainfall.

"As it rains and the snow is melting, it has nowhere to go because the ditches are still full of snow," said David Gibbs, foreman of the Goshen Street Department. "With the amount of snow that's on the ground there's just nowhere for the water to go, so it's going to sit on the roads."

All the water is creating hazardous driving conditions for people who work in industrial park on the south side of the city.

"I would have gone in off of County Road 40 and went the other way but this was the quickest way over here so I came down this road," said driver Ron Stryjewski.

It happened to be the road with the deepest flood waters, Sourwood Drive. In some places the water was three to four feet deep.

"I saw one guy going through, he had rooster tails coming up off the side of his truck three feet high," said Stryjewski.

Underneath all the standing water, the road is riddled with potholes. They were a surprise to drivers.

"Before you know it you hit this big hole of water and you [it hurts] your alignment and everything it's just crazy," said Stryjewski.

Gibbs says his crews have been busy all day trying to do what they can to drain the water.

"We've got crews out that are opening catch basins to make sure the water can get to those areas to drain," said Gibbs.

Century and hackberry drives are also flooded. Drivers are urged to avoid those roads if possible.