Several roofs collapsed because of heavy rain in Michigan City 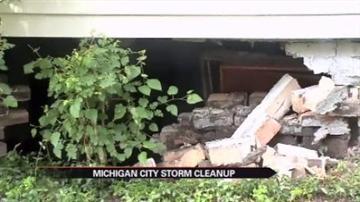 LAPORTE COUNTY, Ind. -- Another round of heavy storms Tuesday night created flooding problems all over Michiana, especially in Michigan City where more than four inches of rain fell. All that rain brought down a few roofs.

Hatfield says Tuesday night's storm caused more damage than they have seen in quite a while.

"Out of my six years of being in this position here with the city, I have maybe dealt with only two of these and those where just very isolated cases and with the situations we had today I mean they were just definitely an odd occurrence,” said Hatfield.

Two buildings lost their roofs – the Rent-A-Center and Family Dollar. A daycare ended up with a hole in the wall.

The Bowman family’s entire basement is flooded with about four feet of water.

"I don't even want to think about it because the memory of it just makes me sick to my stomach,” said Amy Bowman.

Almost everything is lost - an old piano, antiques, and memories.

"This is bad. I’m in shock. I don't know what to do, just wait I guess and see what happens. But it is pretty surreal to be out here around our home and nothing is going on and then you come on this side of the house and there is something seriously wrong,” said Bowman.

The Bowmans are still waiting for someone to help drain out the water. Then they hope to salvage as much as they can.