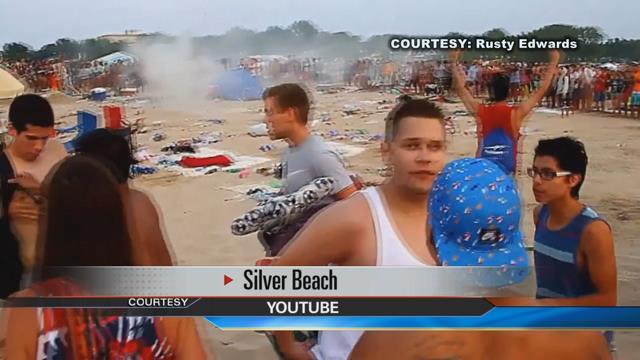 Five people were arrested just before the fireworks July 4 at Silver Beach after several fights broke out behind a concession stand near Life Guard Tower 103. The sheriff and the parks director released a joint statement about the incident.

At the time of this incident the Berrien County Sheriff’s Office and Parks Department had their normal staffing in place for the July 4th Holiday. We have not experienced an incident of this magnitude in the past 20 years for the July 4th fireworks display. Nothing leading up to this event gave any indication that there would be any unusual activities or events. It is extremely unfortunate that individuals chose to act in this manner.

During the daytime hours the crowd was a normal July 4th holiday crowd. Throughout the day park personnel and deputies reminded individuals of the county ordinance that alcohol is not allowed at county parks. Individuals were instructed to pour it out or leave. If they cooperate there is no arrest since there is far too many similar violations and an arrest for each would remove the officer from the park area to process or lodge those that are arrested.

It appeared that this incident was in an isolated area behind the concessions stand by Life Guard Tower 103. After 9:00 pm the crowd swelled for the fireworks and around 9:30 pm a large crowd of young people started chanting USA and began throwing objects and pushing and shoving each other which resulted in some fights. Several officers from the Berrien County Sheriff’s, St. Joseph Department of Public Safety and other neighboring law enforcement agencies were called in to assist in attempting to bring the crowd under control. Responding officers were on scene within 8 minutes and were able to clear within 30 minutes. There were two arrests made for violation of controlled substance, two arrests for disorderly person and one for assault during the July 4th event at Silver Beach. At the time of this release we have been made aware of one injury from this event.

Following this disturbance the fireworks were displayed as normal and crowds cleared without any further incident. This was an extremely unfortunate incident. Silver Beach is a great family destination and the Sheriff’s Office and Parks Department will take appropriate steps necessary to maintain the safety of all visitors.