Sheriffs department accused of allowing felon to live with deputy 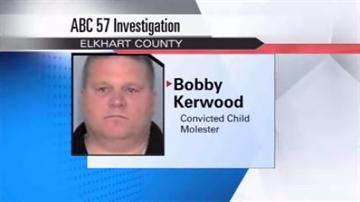 ELKHART COUNTY, Ind. -- Family members of a victim who was molested by 56-year-old Bobby Kerwood are upset he is living with a current Elkhart County Sheriff’s deputy even though the department’s policies say deputies can’t associate with known felons.

Mike Leffler says it was tough back in 2003 when his former brother-in-law Bobby Kerwood, at the time an Elkhart County deputy, was found guilty for molesting his adopted son.

"It (the molestation) went on for two years,” said Leffler.

"It was pretty hard for the entire family and it still is,” said Leffler as he choked back tears.

In April of 2010, Leffler said Ryan was a student at IUSB and was trying to get he life back on track. However he believes his the painful molestation haunted his nephew's mind and attributed to his battle with drugs that ultimately caused Ryan's death when he was only 22 years old.

In 2002 Court paperwork shows Kerwood was sentenced to serve 40 years in prison for the crime, but 10 years of his sentence was suspended on reporting probation. However just 11 years later Kerwood was released on July 5.

"Whether you or I or anyone else likes it he was released from prison,” said Elkhart County Sheriff Brad Rogers.

And what shocked Ryan's family just as much as Kerwood's early release... is that Sheriff Rogers approved one of his employees, a detective named Ron Harvey, personally to step in to help Kerwood with his rehabilitation.

Leffler said he and his family feels like the relationship between a current cop and Kerwood is a major conflict of interest.

"I can understand that they are friends but it is not right that he is an active officer. I don't know of anyone else that gets that kind of treatment or that kind of break for that matter,” said Leffler.

The Indiana sex offender registry lists Kerwood as living at the detective's house.

The Sheriff says he approved it on a temporary basis when Det. Harvey approached him months ago on the possibility.

"Detective Harvey found an apartment and Kerwood, right since his release on Friday, has been staying at that apartment,” said Sheriff Rogers.

The Elkhart County Sheriff's Department has an associations policy that says,"employees shall avoid associations or dealings with persons whom they know, or should know, are racketeer, sexual offenders, gamblers, suspected or known felons, persons under criminal investigation, indictment, or a reputation for past or present involvement in felonious or criminal behavior. The exception to the rule is in the performance of official duties and unavoidable family relationships to the employee."

"I approved that he should take steps to transition Kerwood back into the community,” said Rogers.

The sheriff doesn't feel that he made an exception to the association rules, but Leffler and his family does.

ABC 57 showed Leffler a copy of the associations policy. "After I read the procedures myself it (the Sheriff's approval of Det. Harvey allowing Kerwood to stay at Havey's home) seems to be directly against it and they cut him a special break,” said Leffler.

Kerwood worked for the Sheriff's department for 13 years, the Sheriff said his last rank at the department was a road patrol Sgt.

Det. Harvey has been employed for the sheriff's department for the past 24 years.

Sheriff Rogers said he is a big supporter of reentry initiatives in Elkhart County. He said in 2010 720 offenders from Elkhart County were returned to the community after being released from the Indiana Department of Corrections.