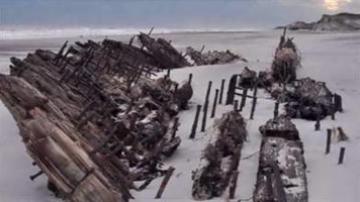 NEW YORK -- The remains of a ship believed to have sunk about 90 years ago has been uncovered by Sandy.

The wreckage, believed to be a four-masted Canadian vessel has been fully exposed on New York's Fire Island.

Bits of the ship's remains have peeped through the dunes many times over the decades after winter storms much smaller than Sandy.

Until now, no one knew the sand was hiding bus-size wreckage.