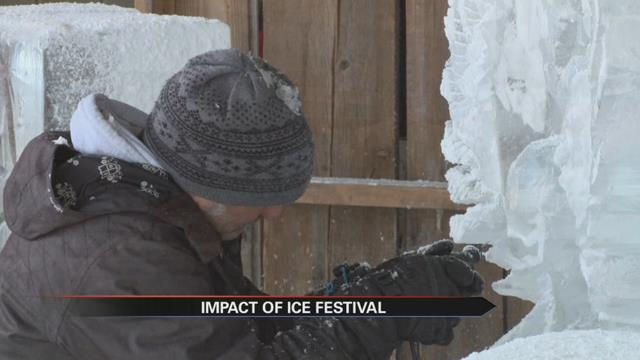 For the 9th year in a row the two day Shipshewana Ice Festival is in action. Since 10 a.m. on Tuesday, ice carvers were drilling and shaving blocks of ice.

This family-friendly event invites families to Shipshewana to experience what this countryside town has to offer.

The organizer of the event, Levi King, said the ice carvers have an opportunity to submit their completed pieces for cash prizes. All this started because of a simple desire to do something during the Christmas season!

“Especially from the time of Christmas to New Year’s, where people are looking for things to do with their kids,” said King.

King started the Shipshewana Ice Festival nine years ago. He said he was going to take a shot at making this come true because sometimes you just never know what can happen.

According to King, 10,000 people will attend this two day festival.

Tuesday is dedicated to ice carvings.  King says the carvers will make sure to create something that the kids can interact with.

Not only does this event bring smiles, it also boosts up Shipshewana’s economy.

“They can stand out here and watch the carvings, which is something you don’t see every day,” said King. “Doesn’t cost anything to come here and be a part of the activity, but then people end up spending money on food and gifts, merchandise.”