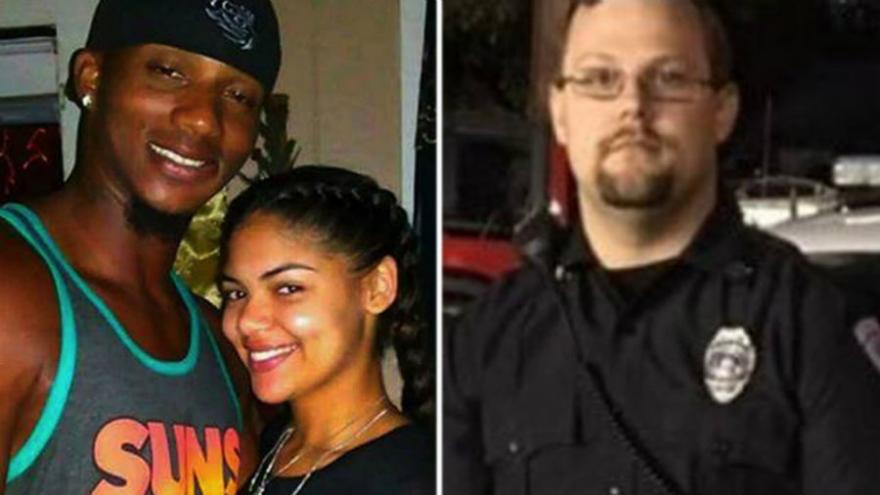 MAMOU, Louisiana (CNN) -- On a gravel road in Louisiana's Cajun country, a sheriff's deputy stopped a man and his girlfriend riding an ATV as the couple headed out to go frogging -- the popular pastime of hunting for frogs in ditches and ponds.

A struggle broke out between the men, and the deputy shot DeJuan Guillory dead.

Only two people know what happened that predawn morning of July 6: the deputy who fired the fatal shots and Guillory's girlfriend -- DeQuince Brown -- who's now charged with attempted first-degree murder of a police officer.

The accounts of what led to the 27-year-old's death near Mamou, a farming community of rice fields, are wildly different.

The Evangeline Parish sheriff's deputy, Holden LaFleur, told Louisiana State Police that Guillory punched him and that Guillory's girlfriend climbed on his back and reached for his gun when he tried to arrest her boyfriend.

But an attorney for the Guillory family said the deputy started the physical confrontation. He also said LaFleur first shot Guillory in his back while Guillory was face down, then fired several more times.

The case has shined a spotlight on LaFleur, a defendant in a civil lawsuit in the 2014 death of a man when the deputy worked for a different department. It also casts a light on the Evangeline Parish Sheriff's Office, which the Justice Department in 2016 found had unconstitutionally jailed people without probable cause.

And the case has garnered uncommon attention for Mamou, a sliver of a town of 3,200 where Cajun accents are thick, riding ATVs on trails is the norm and everyone knows each other.

The killing has sparked talk among some in Mamou about whether the shooting is race-related. LaFleur is white, and Guillory is black. Some locals describe the community as racially harmonious, with many mixed-race families.

As for Guillory's mother, a former Mamou officer, her son's death has eroded the trust she had for her brethren in blue.

"The law I once believed in is deteriorating," Monica Fontenot wrote on a GoFund Me page for expenses for the funeral, which is scheduled for Saturday.

Neither LaFleur nor his family have returned multiple calls from CNN. He has been placed on paid administrative leave, but he has not been charged in relation with Guillory's death.

State police are investigating the case at the request of the Evangeline Parish Sheriff's Office.

An official with the sheriff's office told CNN on Thursday: "We cannot make any statement at this time as this is an active and ongoing investigation. We would rather the facts come out of this case."

CNN reached out to several police unions in the state, but has not reached any that say they are representing LaFleur.

What deputy said about that morning

State police said LaFleur told them he asked Guillory and Brown, 21, for their IDs when he pulled them over at about 4 a.m. The deputy had just wrapped up a call of a reported ATV theft, police said in a press release.

Neither Guillory nor Brown had identification, and Guillory "struck" LaFleur in the head hard enough that he "saw stars," the deputy told state police detectives, according to an affidavit.

With his gun drawn, LaFleur ordered Guillory to lie on the ground. The deputy tried to handcuff Guillory, who was now on his stomach, and the two men struggled, the affidavit said.

Brown, the girlfriend, "approached (LaFleur) from behind ... jumped on his back, and placed her arm around his neck, punching him, pulling his hair, and attempting to grab his gun," the affidavit said.

Brown also said, "We are going to kill him," according to the affidavit.

That's when the melee turned fatal.

"During the struggle with Guillory and Brown, (LaFleur) shot Guillory with his duty weapon," said state police.

Authorities said the deputy was injured in the fight.

State police said they will review dashcam footage from LaFleur's car. CNN's request for a copy of the dashcam video was denied, pending the investigation.

Trent Brignac, district attorney for the 13th Judicial District, said he has not yet reviewed the video. He said he was unclear whether any of the events were captured on camera or audio.

A coroner has not officially issued a report.

What the girlfriend says happened

On their final morning together, Brown and Guillory left a family gathering, parked his truck at a friend's house and picked up an ATV to go hunting for frogs, said Guillory family attorney Pride Doran, who also represents Brown.

The pair passed LaFleur three times before he stopped them and asked for their IDs, Doran said.

"If you are out frogging, you have mud up to your waist. DeQuince (Brown) explained they left their IDs in the truck," the attorney said. "The deputy got irate with them."

Shouting ensued, "primarily from the deputy," who cursed at the pair and told Brown to shut up when she tried to say something, the attorney said. "The deputy pointed his finger to DeJuan's face and DeJuan pushed him," Doran said. "It turned into a fight."

The deputy walked back to his car and returned with his pistol drawn and ordered them to get on the ground, Doran said.

Guillory and Brown did as they were told; Guillory had "one hand up, one hand behind his back," Doran said.

Then, the deputy "got on top of DeJuan, put his knee on his back and shot him once," Doran said.

"We know he was still alive after the first shot," Doran said. "DeQuince (Brown) got off the ground and tried to assist DeJuan. That is when the officer steps back, shoves her to the ground and shoots him three times."

State police said they are investigating whether Guillory was armed; Doran says he was not.

After Guillory's death, authorities charged his girlfriend with attempted murder of a police officer.

State police interviewed Brown. But their reporting of what she said is misleading and inaccurate, her attorney said.

According to the arrest warrant affidavit, Brown said her boyfriend punched the deputy and the deputy ordered Guillory onto his stomach.

Brown said she "approached [LaFleur] from behind, began to choke him and bite him," the affidavit said.

But Doran insists his client never said that.

The attorney said police also omitted key details -- such as Brown's claim that the deputy started the confrontation with Guillory, and her claim that LaFleur shot Guillory when the officer had a knee on his back.

Doran said Brown "did nothing at any point in time" that showed an intent to murder the officer.

"She did try to help her friend after he had been shot a first time," Doran said. "Her efforts did not prevent the officer from shooting three more times."

Brown, who has released on bond, will be back in court on September 7, the district attorney said.

A lawsuit and another police encounter

This is not the first time either LaFleur has been connected to a controversial death -- or Guillory to an encounter with law enforcement.

LaFleur is named in a civil wrongful death lawsuit from a 2014 case, when he worked for the nearby Ville Platte Police Department. According to the lawsuit, LaFleur and several other Ville Platte officers responded to a domestic disturbance and removed Keenan Ardoin, 24, from the home.

"Keenan was placed faced [sic] down into the mud by both officers and held in the mud until he suffocated and died," the lawsuit states.

Ardoin's mother said she saw LaFleur and other officers "on top of her son face down in the mud," the complaint says.

But Joy Rabalais, the attorney representing LaFleur in the civil case, said her client did nothing wrong.

"Since it is pending litigation, I'd prefer not to comment on it ... it will eventually go to trial," Rabalais told CNN. "We've maintained all along that none of the officers did anything wrong that evening."

LaFleur was scheduled to appear in court Wednesday for the wrongful death trial, said Donald Dobbins, the attorney representing Ardoin's family. But after the death of Guillory last week, the trial has been postponed indefinitely due to security concerns.

A coroner ruled Ardoin's death to be accidental and no criminal charges were brought. Ardoin "died as a result of mixed drug intoxication, following alleged usage of cocaine and PCP-laced marijuana," Dr. Terry Welke wrote.

Guillory was on probation for a 2015 incident involving an ATM theft and a police encounter.

He allegedly stole an ATM from a bank using a stolen backhoe and fired at Mamou police, authorities said in court documents. Twelve shell casings from an AR-15 were found in the area where the backhoe was abandoned minutes after the theft, police said.

Authorities said they found ammunition at Guillory's residence that was common for an AR-15. Guillory told them that he had owned an AR-15 but sold it days earlier, police said.

Guillory was charged with attempted first-degree murder and aggravated criminal damage to property -- both felonies -- as well as five other charges, records show.

In 2016, he pleaded guilty to one count of simple criminal damage to property of $50,000 or more -- an amended charge, court records show. He was sentenced to serve 10 years of hard labor, with five years suspended, court records state.

Children 'taught to run to police for help'

Guillory's stepfather, Kenneth Fontenot, said he wasn't ready to talk. "After I bury my son then I'll be ready," he told CNN.

Guillory and Brown had only been dating for about a week, Brown's family told CNN.

"My children were always around authority. They were taught to run to police for help," the father said. "This man (the deputy) has killed everything I've taught my children."

Duncan Brown Sr. said he couldn't say whether he believed the police account that his daughter choked and bit the officer.

"For a woman to see her man shot, anything is possible," he said.

Sheriff's department was under scrutiny

In September 2016, LaFleur was sworn into the Evangeline Parish Sheriff's Office, which has come under federal scrutiny.

Last year, Evangeline Parish was the focus of a Justice Department report for holding people without probable cause or warrants, through a practice called an "investigative hold," federal officials said.

"Often, individuals were in holding cells for several days at a time, where they were unable to contact family, friends or employers and had limited access to food and personal items," the Justice Department said in December.

Between 2012 and 2014, Evangeline deputies arrested more than 200 people on the investigative holds.

The department subsequently said it had taken steps to eliminate the practice.

'This is not a black-white situation'

In a community where faces are familiar, Sarah Manuel Johnson said she was stunned to learn Guillory, who she saw around town, was killed near her home. When asked whether parish residents believe the shooting is racially motivated, she said "absolutely," pointing to posts and comments she read on social media.

"We live in rural Louisiana, and (race) is definitely an issue," said the 10-year resident of the town. "I feel Mamou is more united racially until Mardi Gras."

But 66-year-old Charles Reed, who's lived in Mamou for 60 years, said the community is tight-knit -- and race doesn't matter.

"This is not a black-white situation. Cut our wrists and we all bleed red," said Reed, a town councilman.

"A racial situation is nonexistent. Person to person, we all get along. It's outsiders who come in to stir us up."

Reed said the focus should be on the fact that "we lost a young man."

"We're a little family here in Mamou .... and we've lost a family member."

Courtney Fontenot, the mother of two of Guillory's children, wrote on social media that her boys just miss their father.

"While everyone is arguing and making this all about race and who is right and who is wrong, my sweet boys are here wondering why their daddy had to leave them so soon," she wrote on a social media post. "They don't care who did what."