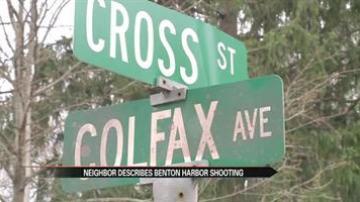 BENTON HARBOR, Mich.- One person was injured in a shooting in Benton Harbor Tuesday night around 10:00 p.m. The shooting happened near the corner of Colfax and Cross streets.

The victim was treated Lakeland Hospital and released shortly after.

A neighbor says he saw the whole thing.

"I heard a bunch of raised voices and I Iooked around the corner of the house and there were several young people right here in the intersection milling around," said neighbor Bill Sisson.

Sisson lives in the house next door to where police say a man was shot. Sisson described what he believes happened.

"Then I went back to my work for a couple of seconds and I heard a shot. Then I looked up and I heard the next two shots and saw the gun in the person's hand pointing towards the house," said Sisson.

Sisson also described a red car which he said the group of young men jumped in and drove off.

"The car took off immediately after the shooting. It went down Robins here," said Sisson. "The 4 or 5 people that were all on the sidewalk including the shooter came running down the sidewalk and ran down the street almost like they were catching up with the car and then they veered off on the first side street."