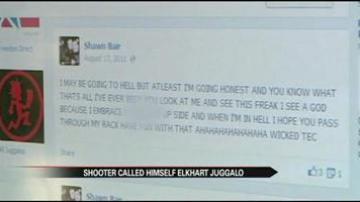 "I feel like something is interesting with his chemical imbalance," says Dr. Gonzaga.

He says Bair may have been mentally ill.

ABC 57 took a look at what appears to be the Facebook page of the alleged shooter, and one of his likes is the controversial band Insane Clown Posse, a band whose lyrics describe murder, cannibalism, and dismemberment.

Followers of this band are called juggalos, and on Bair's Facebook page, he identified himself as the Elkhart Juggalo.

In 2013, the FBI released a report, classifying juggalos as a violent street gang, based on the group's criminal activity and violent behavior.

Even though these facts may be hard to ignore, Dr. Gonzaga says, just because Bair may have listened to the Insane Clown Posse, it doesn't explain his violent behavior.

"I don’t think all the people who listen to them or watch them, doesn’t necessarily mean they’ll act like them," says Dr. Gonzaga.

Dr. Gonzaga says Bair's violent behavior in Martin's was a result of two things, his external influences and his internal health.