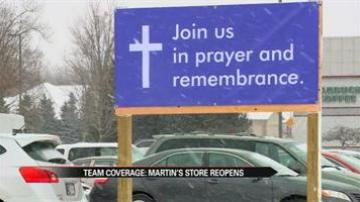 ELKHART, Ind. -- At noon on Friday, Martin's opened its doors for the first time since Wednesday's shooting. Dozens of people returned to their favorite grocery store - some to shop - some to pay their respects.

Many of the shoppers said it was eerie walking down the aisles knowing what happened there just a few days ago, but everyone said it was important not to let the incident define the community.

Martin's employee Tiffanie Comer says she and the other employees just want things to get back to normal.

"It's a very good environment. All of the employees do what we can for each other," said Comer.

Comer works in the deli.

She's thankful she was off the night of the shooting.

Her boss called Thursday night and said the store would reopen Friday. She decided to return to work.

"Because like I said we just need to move forward and be there for everybody and do what we can to move past this," said Comer.

"It was devastating to everybody. We all felt this hollow pain inside when we heard about it. And hopefully this is our way of coping and our way of giving something- even something little back," said Paul.

She says it's most important to not show fear in times of tragedy. That's why she came back to the spot of the shooting.

Shopper Lloyd Yeager was glad he could grab lunch at his favorite spot again. But he doesn't fear for his safety even though it happened so close to home.

"It can happen at any local store. It just happened to happen here. It's not one of those 'Oh go someplace else rather than go here.' like this is a bad place to go. It's a 'Hey yeah this happened. It happened here and it sucks but we just got to get through it," said Yeager.