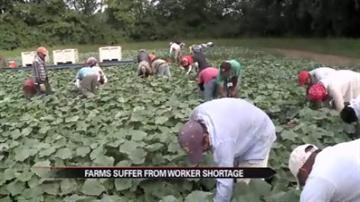 BERRIEN COUNTY, Mich. -- Many area farmers may have to leave a significant portion of their crops in the field to rot. Not because they want to, but because they don't have enough workers to bring it in.

Leitz Farm in Berrien County has been around for four generations. It is now run by four brothers. They say this year has been a great year for produce.

"Whatever you want in Michigan, or whatever we grow, has really, really been good," said Fred Leitz, Vice President of the National Council of Agricultural Employers.

"This year is real good. Everybody make good money. Everybody," said Alejo.

Some would say the migrant workers are the lifeblood of the American agricultural industry.

But this year, not enough showed up and it is causing problems at the Leitz Farm and at farms all across southwest Michigan.

"We normally have 75-80 percent people returning. This year it's only been about 50 percent of our normal workforce returning," said Leitz.

Alejo has been working these fields for more than 30 years.

He said many of his fellow migrant workers are afraid to travel until the immigration reform bill is passed.

Other farms are experiencing similar issues with migrant workers.

"There's been a big shortage of labor this year. We're leaving crops in the field; probably 30-40 percent," said Brett Costanza, owner of A and B Costanza Farms.

We asked why they don't hire the unemployed from cities like South Bend.

"We've had people stop in and usually they last about 10 minutes if they come in off the street. Most people don't understand how hard it is to come out and pick a bucket of cucumbers when it's 85 degrees," said Costanza.

Leitz says this is not a problem that has just popped up overnight.  He says farmers have been warning Congress about this impending catastrophe for 15 years.