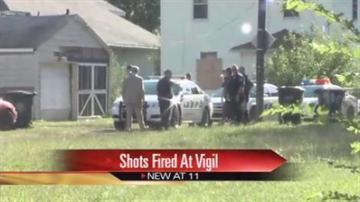 SOUTH BEND, Ind. -- A vigil to commemorate two lives that were lost to gun violence turned into a police pursuit when shots were fired.

It was supposed to be a day of remembrance of 20-year-old Jarina Bailey and 29-year-old Dominique Jackson who were shot to death two weeks ago.

“I’m going to miss her very much and the turnout today was beautiful,” said Bailey’s Aunt Lorraine Bailey.

But that beautiful ceremony was quickly ruined when gun shots were fired in the nearby alleyway.

“We know there was a prayer vigil going on and next thing you know there were five or six repetitive shots,” said Andrew Steinmetz.

Police Chief Ron Teachman who was walking to show his support for the two South Bend shooting victims quickly jumped into action along with several fellow officers in the search for the shooter.

With guns drawn, police looked for the shooter; knocking on abandoned homes, talking with neighbors and searching the alleyway, but never found the suspect.

Neighbors say hearing bullets fly through the air is nothing new in their neighborhood, but the shooter had to be pretty bold to do it in the middle of the day, with half of the police force escorting the vigil and walk against gun violence.

“We hear gunshots all the time but during this time it put us in shock. I know I was in shock. I was like wow,” said Steinmetz.

Some witnesses told police they thought they saw the shooter drive off on a moped down College Street.