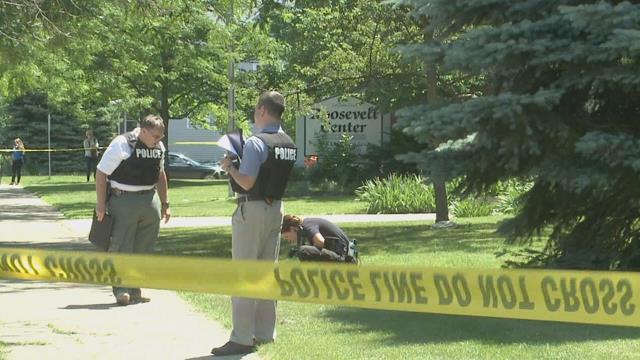 Elkhart Police are investigating a shooting that happened Wednesday just feet away from a playground and a building that holds two summer programs for children.

A little after 11 a.m. police arrived at Kinzy Street and Indiana Avenue after receiving reports of shots fired right outside the Roosevelt Center.

“It's concerning to us that it's in an area that's very populated and especially very populated with children,” says Sergeant Chris Snyder with the Elkhart Police Department.

Sergeant Snyder says right across the street from Roosevelt Park a fight broke out between two people and up to three shots were fired.

“Our victim was walking in the area at the same time and was struck one time in the leg. After being struck he transported himself to the hospital,” says Sergeant Snyder.

Snyder adds the victim is believed to be an innocent bystander. There is little information on the two suspects and those who live nearby consider their actions selfish.

“Right in front of the park I mean come on now you know what I mean. You know my frustrations I can't even put into words,” says Daniel Weddington a Summer Counselor at the Roosevelt Center.

Weddington works with kids who attend summer programs at the Roosevelt Center. The goal is to keep kids away from gun violence but now a crime scene is right in front of their summer safe haven.

“I just want a summer where there are no dead kids, so we keep them busy keep them all involved. Thank God there wasn't no kids involved in the shooting- just adults making bad decisions but I just want to make sure our kids are safe,” says Weddington.

The victim's family says he was treated and released.