Should the mayor of Benton Harbor get paid? 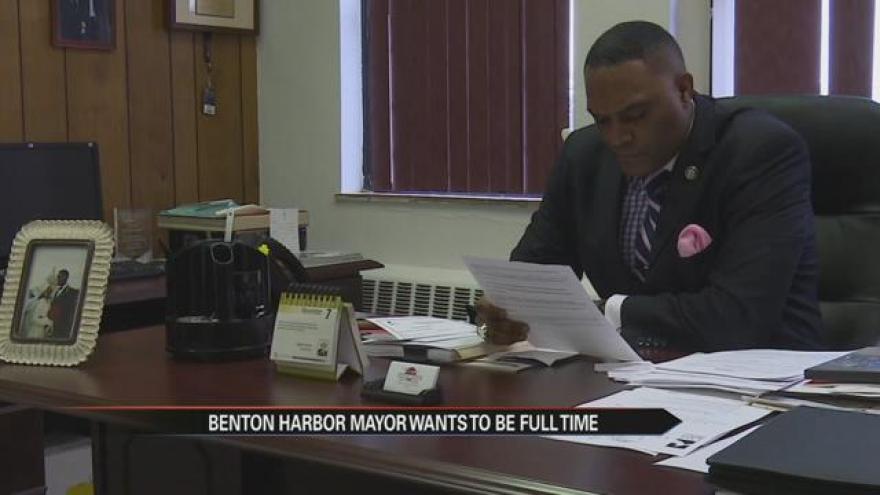 The city’s elected leader has always been a side job, but Mayor Marcus Muhammad wants to change that.

“Having a mayor working a day job and being the mayor at night – I don’t think, in 2017, that that’s in the best interest of the city of Benton Harbor,” said Muhammad.

Muhammad has been in office for just over a year.

He said his experiences led him to propose to the city council Monday that he receive a livable wage.

Benton Harbor’s mayor currently makes about $70 each month – earning $35 for each commission meeting he or she attends.

Beyond that, Muhammad is working for free, in a job he said requires attention 24-hours-a-day.

“I have residents coming to my house, knocking on the door, talking about potholes or inviting me to events or just wanting to have a meeting,” said Muhammad.

His vision is a salary or stipend from the city’s general fund that would allow the mayor to work alongside the city manager in a full-time role.

“That person would have office hours from 9 to 5, open door where residents can come in,” said Muhammad. “Meetings can be set up with business owners, community stakeholders, clergy, Benton Harbor Area Schools administration to discuss the issues and problems of the city.”

But traveling around Benton Harbor shows a city squeezed economically.

There are abandoned homes, shuttered businesses, and a struggling school district.

“What do you say to residents who may be like, we’re already in a time of need, why ship that money toward you when it could go toward potholes and the schools and infrastructure?” asked ABC57’s Taylor Popielarz.

“Well, when you start talking about a 5-digit number – whether it was $50,000, $60,000—if you’d throw that at the infrastructure of Benton Harbor, that would be like throwing a penny at fixing a roof,” said Muhammad.

“They should be receiving some type of payment for what they do, for what they have to deal with in Benton Harbor,” said Neal Lacy, a city resident.

“I don’t think so,” said Cathy Shirey, also a city resident. “He opted to go for the job. The previous mayors has [sic] not received a salary, so what makes him any different than the others?”

Muhammad worked full-time for Benton Harbor Area Schools until he was laid off last year during budget cuts.

He won’t say whether he has a new job now, but he said he’s been in a position to work for the city full-time as a volunteer.

But he said any notion that he’s asking for a salary because he needs an income is far from the truth.

“If Mayor Muhammad was looking for money, I could go to Chicago, I could go to Detroit, I could go to Grand Rapids,” said Muhammad. “Money, for me, is not a motivator. So anybody who would suggest that – it’s just ignorance and they really don’t know me or know my character.”

Muhammad said the issue of the mayor being paid is something that’s been brought up for decades.

He said he thinks now is the time to make it happen.

As for Monday night’s city council meeting, it was just a work session, so nothing formal has been decided.