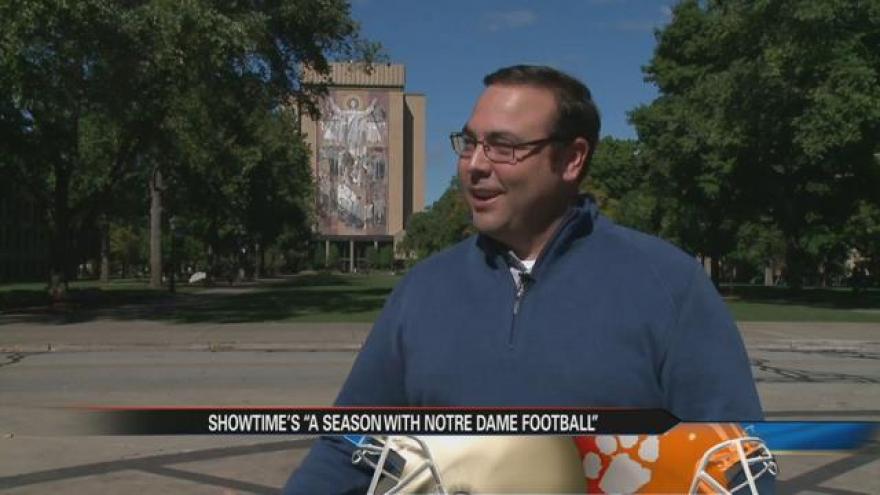 The University of Notre Dame is trying something new this season. They have teamed up with Showtime for a television series that will chronicle the entire 2015 Fighting Irish football season called. The show is called A Season with Notre Dame Football.

This show is one of a kind not only because of the quick turnaround, but also because it is the first time a TV network has been granted access to the players of a major college football program.

Jason Sciavicco is the Executive Producer and show runner for A Season with Notre Dame Football. A typical day may take him anywhere from a chemistry lab to a locker room on Notre Dame’s campus.

“From a day-to-day basis, it started early on in camp, we literally are a part of the team. Our crews are embedded with the team," Sciavicco said.

The crew is made up of some of the best photographers, producers and writers in the country.

“This kind of show has never been done before. There’s never been a show like it," said Sciavicco.

"This is a great thing. It’s an experience of a lifetime. A lot of people can’t do this. So we embrace it and we’re excited," Irish safety Elijah Shumate said.

There are up to four cameras rolling at a time.

“We wanted to be able to tell a true story of what it would be like to be a part of this team in 2015. And in order to do that, we felt like we needed all-access," said Sciavicco.

The cameras go wherever the Irish go.

Sciavicco says he and his Showtime team are able to capture the intimate moments –whether they’re joyful or heartbreaking.

They are candid moments in the lives of players.

The project was 4-5 years in the making.

“We really wanted to go after a school that we felt could contend for a national championship as well as a school that was going to completely open its doors. And in college football, not every school is willing to do that," said Sciavicco.

Sciavicco says the University of Notre Dame is a perfect fit because it’s so much more than just a football school.

“You take a team like Notre Dame that’s competing in the top six teams in the country, competing for a national championship, but academics to them is very high on their radar. To me, that’s very impressive," Sciavicco said.

The players are fans.

“It’s kind of interesting to see how they make it into a TV show and they fit three months into 30 minutes. It’s really interesting and it’s a good show, it’s engaging," said Irish defensive lineman Isaac Rochell.

“Some of the guys were funnier than usual, the characters on television, but it was a good series," Shumate said.

Sciavicco says he’s never before called himself an Irish fan.

If you don’t subscribe to Showtime, Sciavicco says you should.

Four episodes have aired so far.