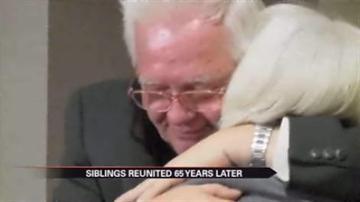 A brother and sister were reunited after 65 years, all thanks to a seven-year-old and his iPad.

The two were separated as little kids, and they, along with their three siblings, were scattered across the country.

On Saturday, after decades of trying to track each other down, Betty and Clifford reunited for the first time in over six decades.

Clifford's landlord's son was the one who brought them together.

"Family is important. I went on Facebook and I typed in Boyson. There were a whole bunch of pictures that showed up. One of them kind of looked like Clifford and I zoomed in on it, and it started to really look like Clifford, and I showed it to my mom and dad," said Eddie Hanzelin, Clifford's neighbor.

7-year-old Eddie Hanzlin used the iPad to search for Betty under her maiden name on Facebook and found her.