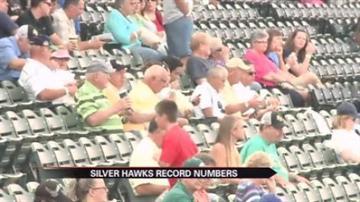 SOUTH BEND, Ind.-- The South Bend Silver Hawks recently celebrated their 5 millionth visitor at the Cove. The stadium's family-friendly attractions along with this year's winning season are bringing in record numbers in attendance.

Attendance numbers are up 25 percent so far this season, and according to Team President Joe Hart, if people continue to come out to games like they have been, attendance numbers could double this year from 2011.

It's America's favorite pastime. Baseball. Who can resist those classic peanuts and Cracker Jacks?

“The weather is really great, and what better way to spend a summer evening than inside a ball game? What’s better than that?” Silver Hawks fan Don McAlhany said.

Those who come out to the Cove said they really notice the changes.

“Every time we’ve been down here it’s been something new, and they’ve revamped it,” McAlhany said.

This year's winning season has been the icing on the cake, Hart said.

“To have a first-place team win the first half of the division, we’re going to the play-offs. Our first home game is September 5, so it even gets to extend the baseball season out a little longer for those who haven’t had a chance to come out,” Hart said.

Win or lose, the numbers don't lie, since new owners took over this team two years ago, attendance is up a staggering 93 percent and people are still coming.

“We feel we’re a big asset to downtown South Bend. That’s 200-plus thousand people that are coming back to the community, and really for us, we consider that part of our mission too, is to bring life and bring people back downtown,” Hart said.

If attendance continues as Hart has projected, he said he hopes to hit 225,000 people by the end of this season and he says they are shooting to raise the bar even higher next year.