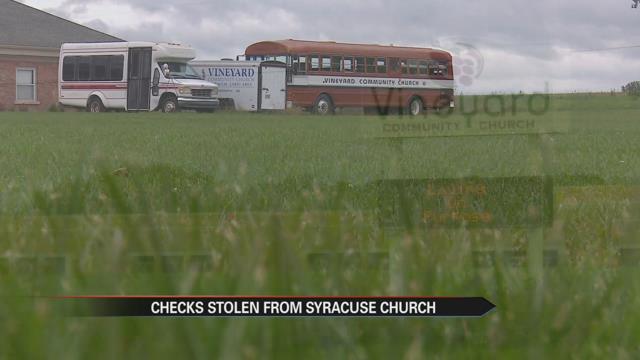 Six suspects were caught last night in Kosciusko County for allegedly stealing checks from a church and using them to buy drugs.

“I find it’s absolutely unbelievable that somebody would steal anything from a church. It’s deplorable,” said one community member Joe Howe.

Lake City Bank contacted police when they thought something was fishy with someone cashing Vineyard Community Church checks.

“This is a great church. They do a lot of really good stuff for the community, and for somebody to steal stuff from the church. It’s not right,” said Howe.

Kosciusko County Sheriff’s Detectives used surveillance footage to identify one suspect at the bank. They tracked him and another suspect to a Syracuse hotel—surrounded by syringes, meth, and other drugs.

“Drugs in this area unfortunately have gotten out of control,” said Howe.

Through further investigating, detectives discovered five more people hiding out at 422 South Union Street in Warsaw—also with drugs. They arrested four of them.

“I grew up here, and we didn’t have near the issues,” said Howe.

Four of the six suspects arrested already had active warrants for battery, burglary, fraud, and other felonies.

Kosciusko County detectives said in their press release that the investigation is ongoing, so more charges could be filed in the next week.

Since the officers worked overnight, they were not available to comment this afternoon.

The pastoral staff at vineyard community church also said that they didn’t want to say anything at this time.