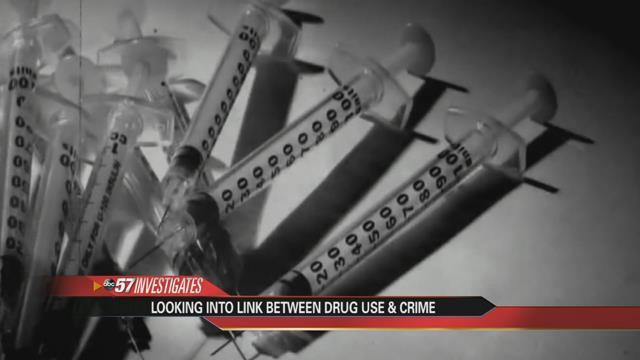 We looked into the connection between drug abuse and property crimes in St. Joseph County. The correlation is pretty high.

Recovering addict Richard Riggs says at least 90% of his friends who are addicts have stolen for drug money.

“It was all about me. It wasn’t about anything. It was just about sustaining that high,” said Riggs.

One man was even arrested Friday morning for burglary in St. Joseph County. He reported having a history of substance abuse.

“Our experience is that somewhere around 48% of the people who get arrested for those crimes self-report having a substance-abuse issue,” said St. Joseph County Assistant Chief Bill Thompson.

Those crimes are burglary and theft.

As a comparison, Chief Thompson looked at Bureau of Justice statistics.

“There was a Bureau of Justice statistics report that came out in the early 2000s that put the number lower—they put it at 25%,” Chief Thompson said.

That’s nearly half as many as in St. Joseph County.

Plus, these statistics are based on self-reported data, which means the real numbers are probably higher.

“I’d walk around and I’d be able to tell who the secret shoppers are, where the security guards were going, who was punching in at what time. I spent so many hours in those stores just to rob them, just to go out and trade a $2,000 computer maybe for $100 worth of dope,” said Riggs.

Riggs was caught two or three times for stealing from stores.

However, he was arrested in January 2015 for drug possession.

To Riggs, however, prison was actually helpful.

But, that isn’t the case for everybody.

“We know there’s a pretty high possibility of someone who’s addicted even if they get into a treatment program, that there’s a fairly high probability that they’ll be back in the system at some point,” said Chief Thompson.