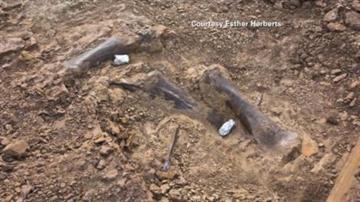 Scientists in Wyoming are digging up the skeletal remains of three so-called "triceratops" believed to be about 67-million years old.

A rancher led the experts to the site about 200 miles from Cheyenne.

Scientists say there are three skeleton, one probably a child and one who likely met a gruesome death from a terrifying predator.

They say the trio could be male and female and their young.

Triceratops were three-horned, plant-eating dinosaurs considered one of the last of the giant reptiles.

The excavation began in May and is expected to take about a month.