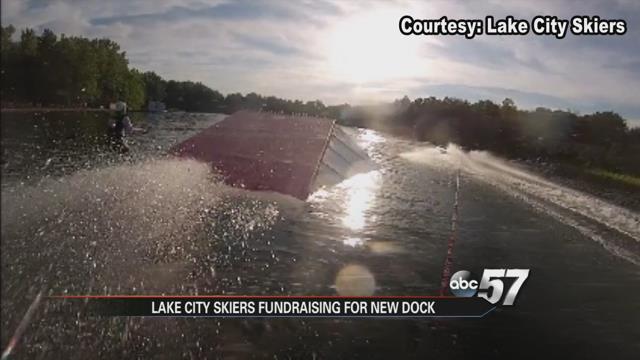 The Lake City Skiers are based out of Warsaw and put on skiing competitions and tournaments each year during the summer.

The group is a non-profit organization and shows are free to the public but the group needs help from the public so they can continue to perform at Hidden Lake this upcoming summer.

“It’s a lot of fun to go out there and perform. It kind of gets in ones blood,” said Chuck McLaughlin, Vice-President of Lake City Skiers.

The group started back in the late 90's. McLaughlin used to ski and that is how he first got involved with the group.

He said a crucial part of every show is the starting dock where each skier will load up for their performance.

“We’ve repaired it several times over the years. It is a wooden structure with barrel floats underneath it and it’s just kind of outlived its lifespan,” said McLaughlin.

The current wooden dock was built back in 2003 but now needs to be replaced because it is worn down not suitable for use.

“It has deteriorated on us to the point that it’s really not safe to use anymore. Over the course of the summer, we found some pretty good chunks of lumber from underneath of it floating in the lake," McLaughlin added.

According to the USA Water Ski Association, the group must have the new dock installed by April, prior to the season beginning in June.

“We’re asking any businesses or foundations if they could help fund the cost of it,” he said.

McLaughlin said they have about 500 people at each show during the summer beginning in June and going until Labor Day.

“They come in motels, gas, restaurants. A lot of revenue for the community. It is about $250,000 in revenue over the course of the summer.”

In all the group has about 30 different shows that take place on Tuesday and Sunday evenings.

He knows getting a new dock is crucial to the future of the group and the revenue it generates for local communities extending past Warsaw into Goshen and Plymouth.

“If we don't get it USA water ski will probably send the tournaments to Illinois or Wisconsin so we would lose all that revenue to the community.”

The group has a couple options when it comes to the new dock. They can replace the current wooden one with another for about $10,000. Another option would be to get an aluminum one for about $20,000 and they would not have to replace the dock again.