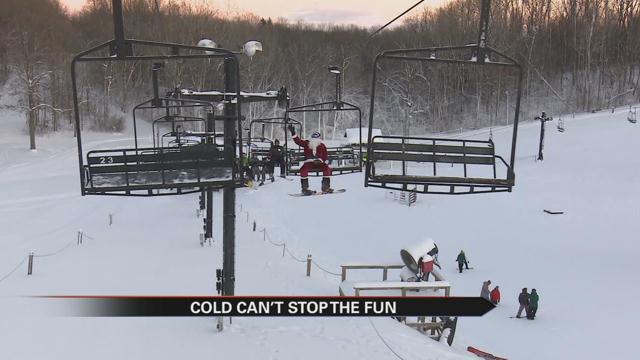 As drivers continue to grumble about the snow, Swiss Valley is welcoming it. ABC 57’s Jess Arnold checked out the slopes Sunday with a very jolly old elf.

Even Santa is trading his sleigh for a snowboard for the ski season opener.

Unlike many drivers, Stafne is thanking mother nature for this weekend’s weather.

“As you can see, it’s been good to us, and it’s allowed us to open up before Christmas break, so everyone can come out and enjoy their holiday here skiing and snowboarding. It’s allowed for us to make snow. We’ve got a great base, and Mother Nature has blessed us here with the white stuff,” she said.

“The girls have been itching to get out on their skis for the first time this season, so we figured we had nothing going on today, so we decided to spend the day here together,” said one skier from Indiana, Lizette Driscoll.

Not even the cold can phase a dedicated snowboarder.

“You know it’s not too bad,” said another Indiana skier, Kristen Anderson.

She says that while the temperature is in the teens.

“At first ,you know, you’re pretty cold, but once you get up on the slopes and stuff, then you’re fine… but you’re just busy having so much fun that you just don’t really think about it,” said Anderson.

They wouldn’t think about sitting out the ski season opener on account of slick roads.

“We stayed on the main roads as much as possible, took the longer route, but we made it here safe and sound,” said Lizette Driscoll’s husband, Jamie.

ABC 57’s camera was actually the first one ever to catch Santa in action on Swiss Valley’s slopes, according to Jamie Stafne, whose family has owned the lodge for 48 years.