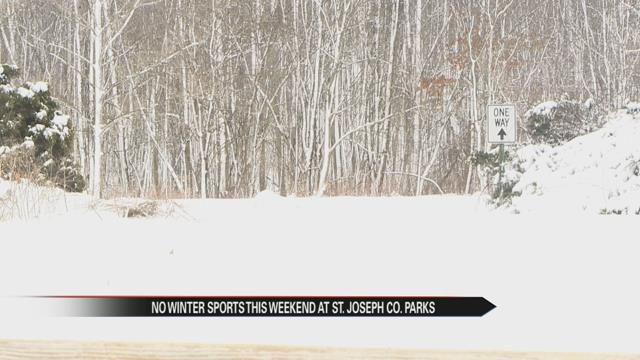 Even after all the snow Wednesday, winter sports will not be open at St. Joseph County parks this weekend.

Intertubing and ski rental will be closed once again at St. Patricks and Ferrettie-Baugo creek parks.

“We came today to ski and unfortunately it was closed,” Nancy Yokom, a park guest, said.

Evie Kirkwood, director of parks says it’s due to the year’s weather.

“We’re in this unusual cycle this winter of a burst of snow and then unseasonably warm weather. So that’s been really difficult and a challenge for us this year,” Kirkwood said.

Even with the  flakes left over from Wednesday’s blizzard, the high winds and rising temperatures make the trails and hills unusable.

“There were many branches down, trees that were leaning over the trail, brush that was kind of over the trail the skiers would have to break through, and that’s just not a safe situation,” Kirkwood said.

With the rental barn closed most weekends, that’s less winter revenue for parks.

“It does challenge us just a little bit to make sure that our resources are used efficiently throughout the rest of the year,” Kirkwood said.

However, a depressed winter makes for an early spring at the parks department.

“People have been out hiking, walking with their dogs, that’s great,” Kirkwood said.

Optimistic visitors like Yokom are still finding ways to utilize the moderate winter weather without skis.

“We said ok, ‘let’s hike.’ It was wonderful. It’s a beautiful day and we really enjoyed walking by the river and the trees are beautiful,” Yokom said.