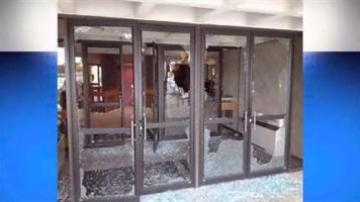 MICHIGAN CITY, Ind. -- The front doors to Michigan City's City Hall are waiting for new windows after a man took a baseball bat to 13 glass doors on Monday afternoon.

Police said that 28-year-old Matthew Wolferd caused close to $6,000 in damage when he parked his car at the building's south entrance and then proceeded to break all of the glass at both entrances.

Officers were on their way to investigate a similar incident at a gas station nearby – when they had to turn around.

“We started receiving calls from City Hall right next door to the Michigan City police station regarding a male suspect breaking out windows at this location," said Royce Williams, Chief of Services with the Michigan City Police Department. Police said Wolferd committed both acts within a 10-minute window.

Workers in the building instantly heard Wolferd's glass shattering and called 9-1-1.  That’s when the man was greeted at the door by none other than the mayor.

"At that point, I had been notified and confronted the individual by the doors and told him to put the baseball bat down," said Mayor Ron Meer.

Mayor Meer brought out his own baseball bat -- a gift that he had received upon first taking office. He grabbed it as defense in the off-chance Wolferd attacked him.

Officers arrived within minutes and said Wolferd resisted arrest, leaving officers no choice but to tase him before handcuffing him. Police said they still aren’t sure what provoked Wolferd’s outburst.

“Subsequent after his arrest he was brought to the Michigan City Police Department, charged accordingly, and when he was spoken to he invoked his rights to remain silent so at this juncture we have not spoken to him,” said Williams.

Mayor Meer said he’s thankful that no one was hurt  and that police were able to get there just in time.

“We do have our surveillance cameras here, we do have our panic buttons -- I don’t really know much more than having a one-minute police response if you can do much better than that," said Meer.