Smash and Grab Robbers in Niles 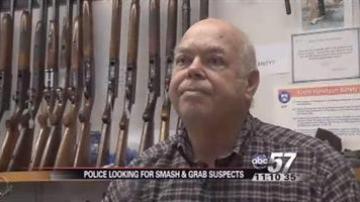 NILES, MICHIGAN -- Thieves have been up to no good in Niles.Business owners there want the smash and grab suspects arrested now.  They have hit several restaurants, including crossroads family restaurant.  The burglars broke in smashed this window behind me and got away with about two hundred dollars in cash.

Parritt says he does honest business and he was hurt when he found out his pawn shop had been ransacked.

"It felt like a lot of people that come in here looking for their stuff that's been stolen..i felt the same way", said Ken Parrit.

"Ya we are only three weeks into this so as new business owners..it's a little discouraging...with little police coverage at that time of night", said Jeff Harrell.

The business owners say they have confidence that the police will catch the smash and grab bandit, but they say they are not taking any chances.

"We already ordered bars for the windows", said Parrit.

"We are setting up a surveilence system", said Harrell.

"We received a call about three orf four in the morning..i guess one of the newspaper delivery people found that the door had been busted out", said co-owner of Crossroads family restaurant Jeff Harrell.

Jeff Harrell's business was not the only place that got hit by smash and grab robbers, five hundred dollars was stolen from China One, and both east Main Diner and the Prime TAble were broken into on November 15th.  Six days later Ken's discount sales was broken into and the owner Ken Parrit says he got hit the hardest