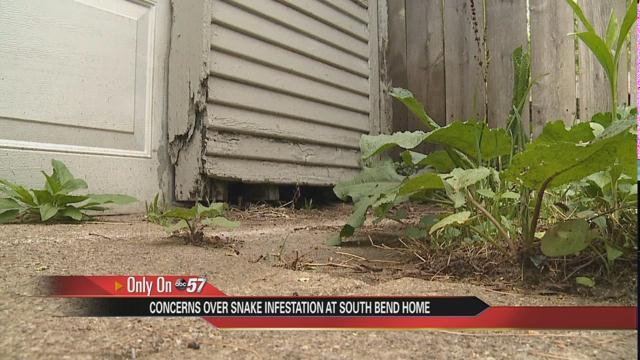 Marcia Humphrey-Benman says it worries her because kids play in the yard and she's scared they might run into a snake.

Humphrey-Benman has lived on Diamond Avenue for most of her life. She says she has no complaints about the area except for the one abandoned home across from hers.

“The snakes are festering in the tall grass over there,” says Humphrey-Benman.

Humphrey-Benman believes South Bend Code Enforcement needs to cut the grass of that property so the snakes will find somewhere else to roam.

Humphrey-Benman says after numerous attempts to get someone out her neighbors yard to take care of the snakes, residents were forced to take matters into their own hands.

“We heard a loud banging and when we investigated, my mom was on the porch here, she was killing a snake with the shovel,” says Humphrey-Benman.

ABC 57 contacted South Bend Animal Care and Control. Then we were told to call 311 - and someone came out to take away the dead snake.

Randy Wilkerson with South Bend Code Enforcement says he was shocked to get a call about a snake problem.

“I'm kind of at a loss for this because I've never had anybody call about snakes before,” says Wilkerson.

Wilkerson says this problem is out of his control.

“They're a part of nature and I can't really control where the snakes live," said Wilkerson.

But he did offer a short term solution.

“Their grass is going to get cut by the city in a regular rotation starting this week," said Wilkerson.